Quina is perhaps one of the first video game characters to be neither male nor female outright. They are introduced in Final Fantasy IX as a chef and part of a race of Qu who live in the world’s swamps.

Quina’s appetite for food and to cook the best foods are the literal driving force behind them joining the player’s party. Once they do join, you’ll come to find them much more helpful than most comedic-centered characters in JRPG history.

The Blue Magic skill in FF9 is one of the most effective uses of “Enemy Skills” in the Final Fantasy franchise. Quina learns Blue Magic by eating random enemies in the game. They also begin to show that they are more than just hungry, but caring and ready to fight alongside their friends to the death.

In this Quina Guide, we’re going to give a detailed exploration of everything about Quina, and hopefully how you can best make use of this Qu.

Some Quick Key Info About Quina 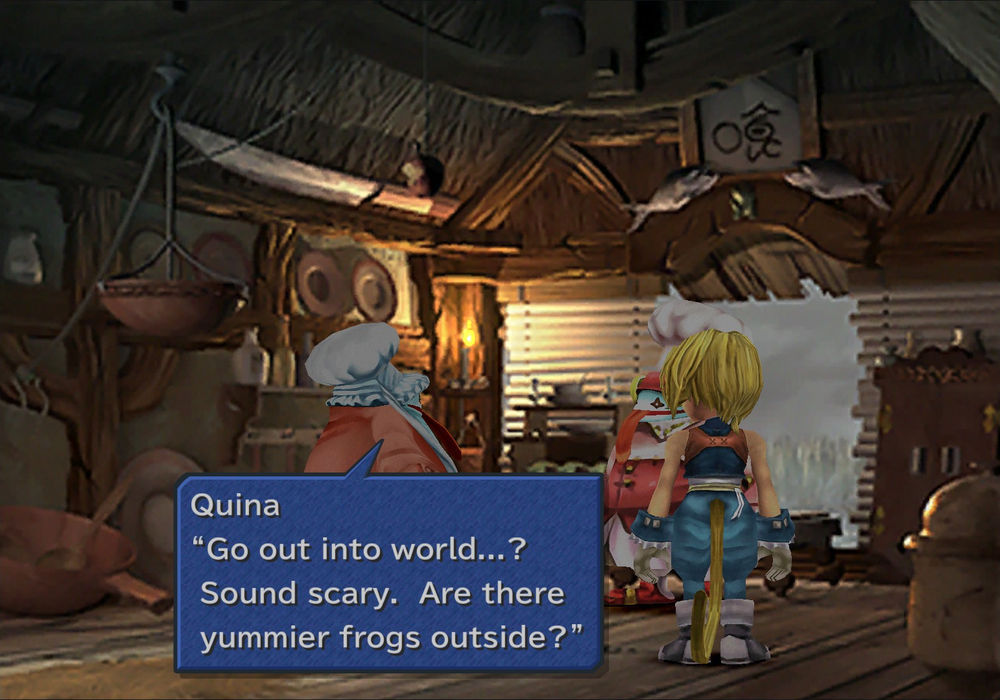 Technically you can first encounter Quina Quen in the kitchen of Alexandria Castle, cooking up a storm before all the first pieces of plot fall into place. This would be before the big Play the Tantalus puts on for Queen Brahne and before Garnet flees the castle with Zidane.

However, Quina doesn’t join your party until you enter Qu’s Marsh. You can do this optionally as soon as you leave Lindblum toward Burmecia. It is best to get them there.

If you don’t acquire Quina at this time, the following parts of the game will be more challenging, and you can still get Quina later on as you must enter a Qu’s Marsh at one point in the story. They want to catch a frog(Quina’s favorite food) and can’t, so Zidane helps.

Quina is told by their master, leader of the Qu; Quale, to go with you after being scolded for being lazy. Quina is instructed to taste food from around the world. As simple as that, they join up. 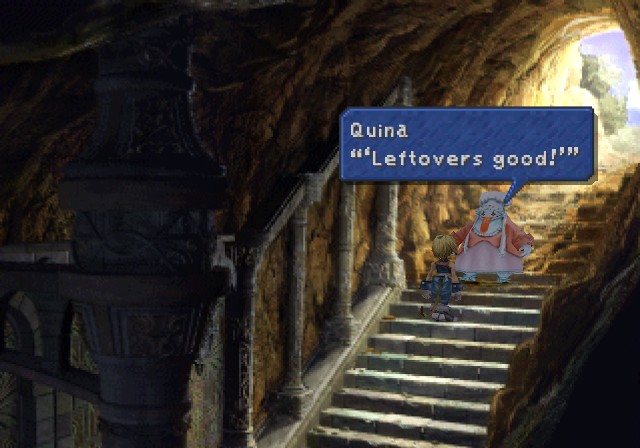 Quina comes in and out of the party, not always partaking in the larger story. They provide some excellent levity when around. Generally, they try to eat everything unless told otherwise.

If Quina is with you when you head to Burmecia, they will show care in more than food by trying to cheer up Freya. When Quina hears Vivi talk about not being human, Quina quickly shuts this talk down. Letting Vivi know he is the most “human” human Quina has ever met.

These little moments show Quina is more than just hungry but cares about the mood of their friends.

It’s possible to have Vivi and Quina marry as Garnet and Zidane must at the Dwarf city. When this is chosen, Quina interestingly expresses happiness at the marriage. I find it interesting as it isn’t a real marriage or brought up again. Perhaps, Quina truly enjoys the moments more than the lasting impressions of those moments.

Later Quina is fished out of the water, chases away a would-be-kidnapper of Eiko, and mysteriously washes up on shore thought to be dead! They aren’t; Quina pops up as hungry as always.

Zidane and Quina are stuck together near the end of the game when the party splits up. Zidane is somewhat disappointed by this and admits to Quina he only took them because they were the only ones left over after everyone took off.

Yet, Quina delivers a line that somehow makes me feel good each time I hear it. I can’t quite explain it, but it’s made me like Quina ever since.

Quina goes back to doing what they love, nothing fancy, nothing new. Right back to cooking in Alexandria’s kitchen, where they started.

I’m not sure if it’s meant to be a take on how Quina didn’t need to grow as much as the other characters or that now Quina is no longer lazy, and that was their arch.

Either way, I say it was good to have Quina Quen along for the ride. 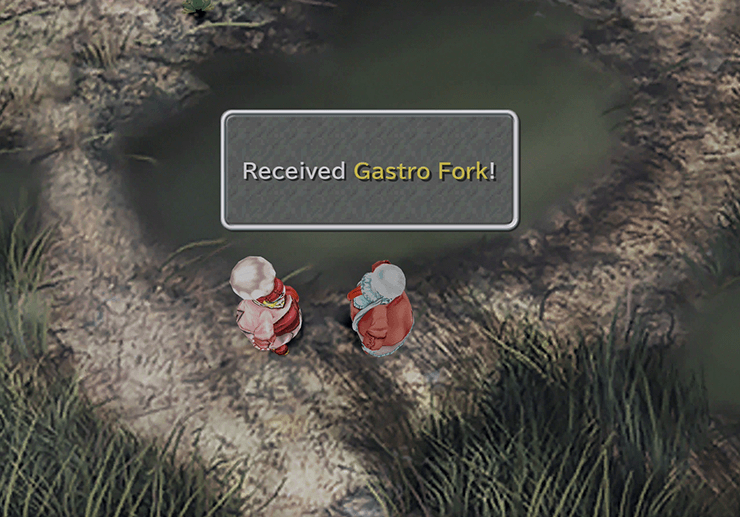 Stat growth in FFIX is a little tricky. Essentially, a character levels up based on a set amount of experience. Like many classic JRPG’s, you would appear to have no real control over their stat growth. It turns out this is not entirely true in FFIX.

Stats that can change are Speed, Strength, Magic, and Spirit. Strength and Magic going up will increase a character’s HP and MP, respectively.

When you equip an item with a Stat Boost, such as a Yellow Scarf, which gives +2 Strength, and gain a level, the Strength Boost will remain a part of your character’s stat calculation for the entire game.

That may not yield an immediate effect, as the final stats are calculated by something like initial stat PLUS a division of your level PLUS Stat Boosts, then divided by 32. Yeah, that can be a little confusing.

The easiest way to help you make the best out of Quina’s stats is to suggest the following strategy.

Gain levels as slowly as possible until all characters are in your party. Always choose to equip items that give boosts to Strength and Magic. Quina is naturally the slowest, and you can cast hast on Quina if you need to, but you won’t make them terribly fast. It’s better to focus on their strengths.

Quina uses attacks that do magic damage. Their normal attack is pretty random, so if you have to choose between more Magic or Strength, choose Magic. Because of the random damage from Quina’s Forks, they will occasionally hit hard even if you’ve neglected their Strength.

Quina’s weapon of choice in the game is a Fork. It’s undoubtedly one of the most intriguing weapons ever used. It is also somewhat horrifying when you consider that Quina carries it around with the actual intention of having a literal taste of every monster you encounter.

Here’s what they are and where to get them. 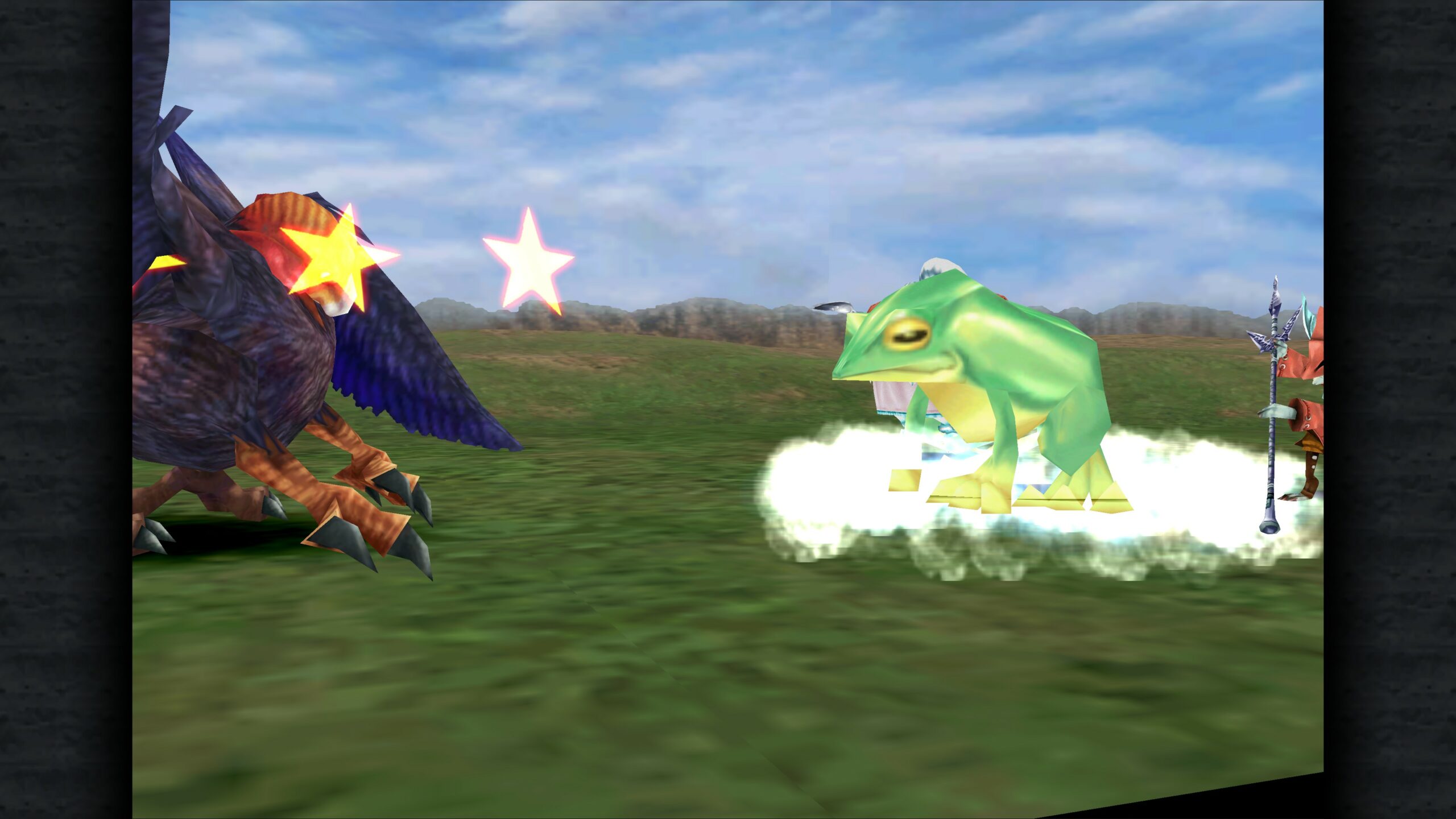 As you start to notice, frogs come up a lot with Quina. That is because they are Quina’s favorite food. You must catch frogs every time you visit a Qu’s Marsh.

If you wish to master Quina, this is not negotiable. Catching frogs is the only way to unlock Quina’s Ultimate Weapon. It also makes one of their Blue Magic skills go from weak to mighty—Frog Drop.

Is there a trick to catching the frogs? It’s honestly not hard; watch where they jump out of the water and go near the spot and spam the catch button when the frog is close, or try and time it for a bit more of a fun mini-game.

OH! If you leave a male and female frog in a swamp, it will increase the rate of frog spawning in that swamp. So maybe don’t catch EVERY frog when you visit.

Speaking of Frog Drop, let’s go over all the skills Quina can learn by eating the many monsters in the game. I will list them from the earliest part you can get them.

I’ll add the location of the easiest monster you can learn the skill from under the skill itself. However, if you missed some or are already late in the game and are searching the map to finish Quina’s skills.

Using Quina’s skill: Eat. A player can devour any regular enemy at 25% or lower health to learn new Blue Magic.

Are Blue Mage Spells Worth the Time? 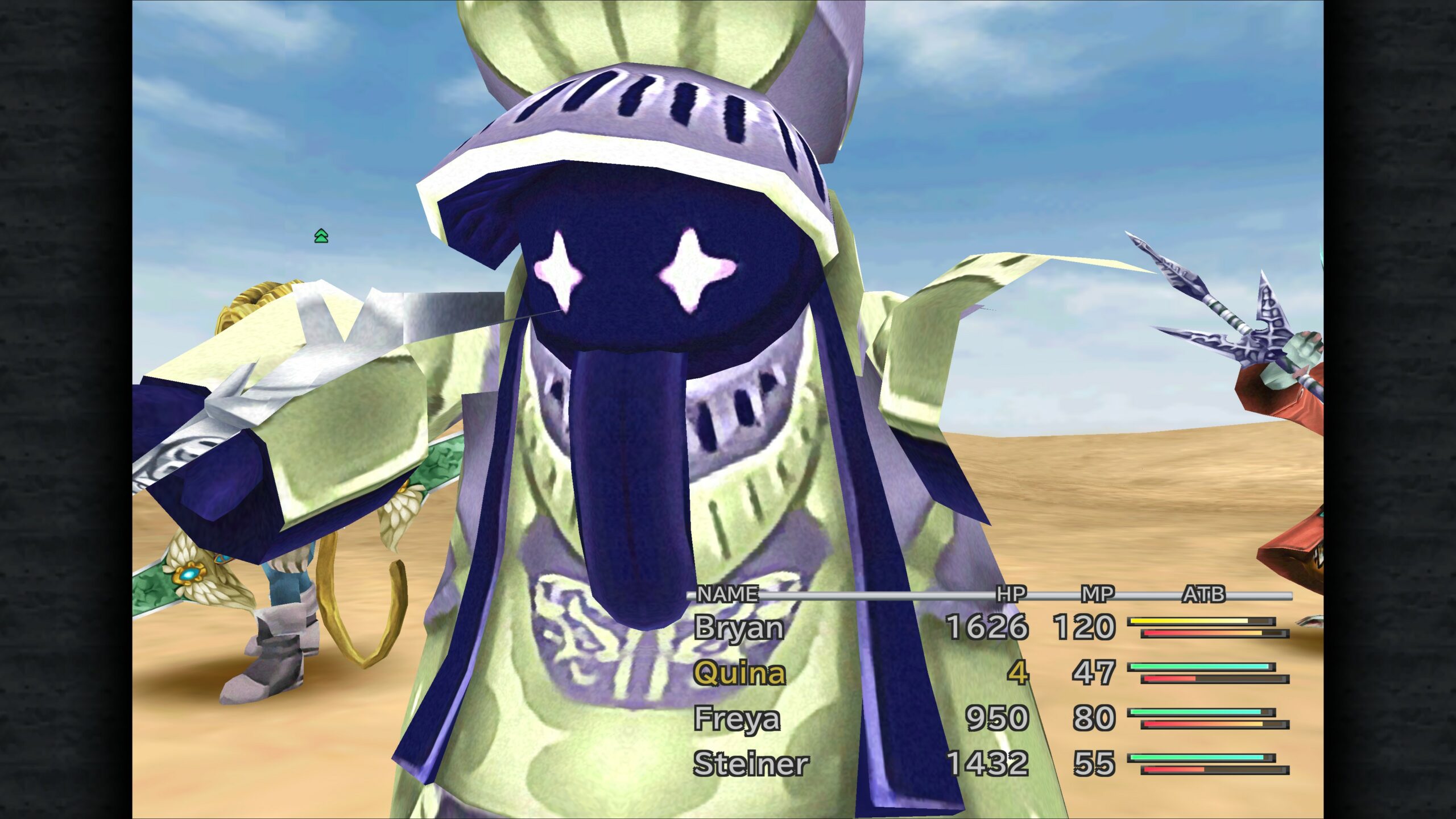 Abusing the unique requirement of Limit Glove, for example, Auto-Life revives with 1 HP, and Characters with Cover can guard Quina. Doing this, you can start any boss fight with one heck of an uppercut, one shot hit to almost all early-game enemies.

Also, Night only misses enemies with a high magic evasion rate. Have your characters equip Insomniac in their ability slot, and this skill becomes one of your most used.

Cook allows Quina to Eat a target when they are at 50% health instead of 25% health. While this can be pretty useful here and there, it makes Quina’s Trance pretty useless in a Boss Fight. 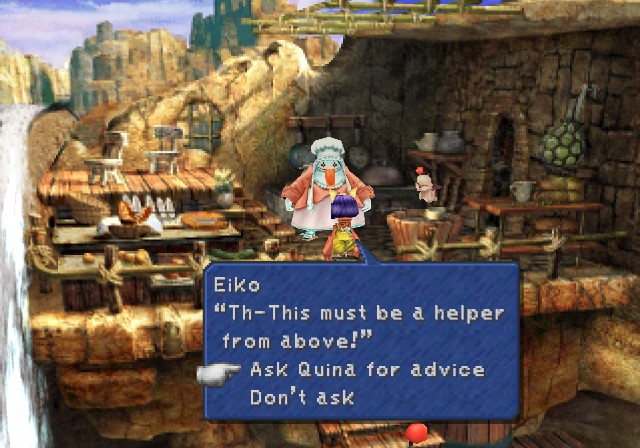 The Frog Mini-Game is the main side quest, as discussed earlier. There is one unique Story Beat that can be had with Quina.

Visit Quan’s dwelling with Quina and Vivi in the party after you’ve obtained the Hilda Garde III. You will unlock a somewhat touching and unique cutscene for Quina and Vivi.

Afterward, check the clock out to get yourself a nice pair of Running Shoes.

You should ask for Quina’s help when cooking as Eiko with her Mogs. These choices will lead you to the best meal and unlock more story dialogue in the following scene.

FFIX characters learn abilities from the equipment they wear and AP over time. Quina learns High Tide from all of their Forks, so don’t worry about rushing on that one. I’ll leave a vast list of what Quina can learn here, only marking out unique abilities and what you need for them lastly.

Quina has a Robe Unique to them called a Glutton’s Robe.

The robe can be Synthesized with a Mythril Fork and a Cotton Robe at Daguerreo or Stolen from Quale.

Best Equipment is the following: 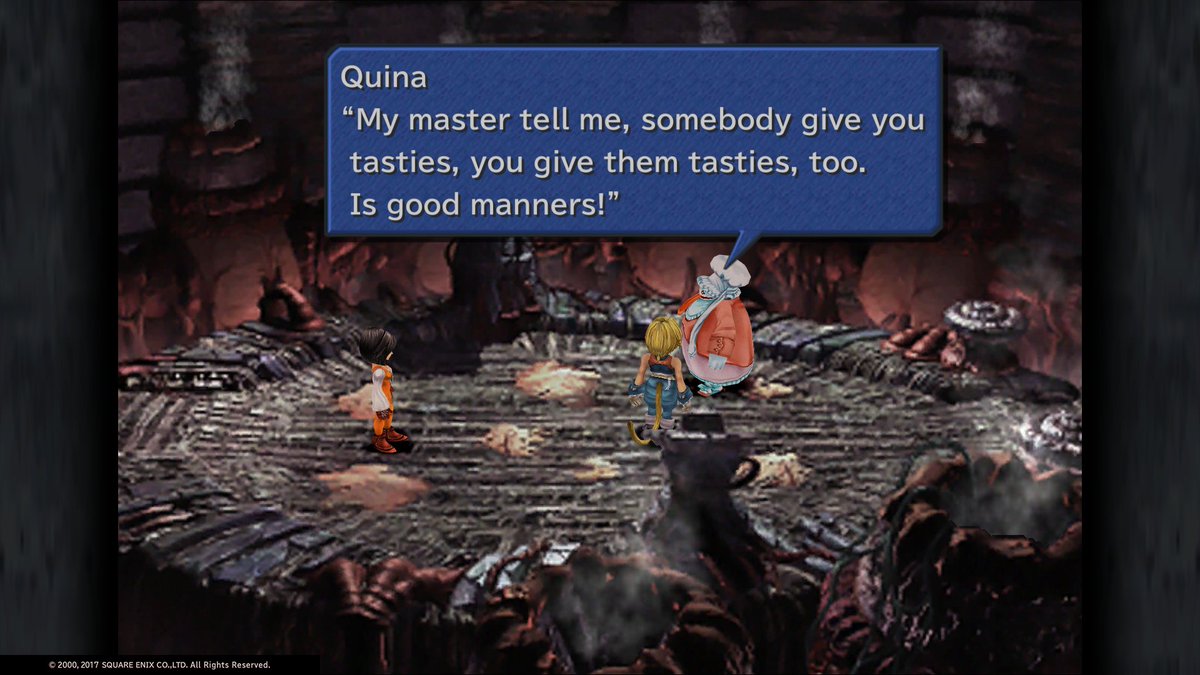 Question: What is Quina?

Answer: Quina is a Qu. Neither male nor female. A Qu passes on seemingly through an egg, passing down their Blue Magic and ingrained chef skills to their protégé.

Question: How to get Quina in FF9?

Answer: You must enter a Qu’s Marsh.

Question: When can you get Quina?

Answer: As soon as you see the first Qu’s Marsh. You’ll have Freya, Zidane, and Vivi in your party heading to Burmecia to save Freya’s people.

Question: How to use Quina?

Answer: Quina is best used as a good support character. However, with LVL5 Death, you can use them to farm Grand Dragons once all the characters are equipped with good stat-boosting items for easy level and AP gain.

Question: Is Quina in any FMV in the game?

Answer: Only one, that would be the final FMV.

Question: Is Quina a good character?

Answer: Yes. Quina is handy and is the only good substitute for a White Mage at least twice in the game. They also make the Desert Palace much easier.

Answer: In the early game, yes. Using the Limit Glove trick, Quina can kind of kill almost anything in one hit up until disc 3, including bosses.

The Tale of Quina Quen

With that, I leave you an excellent Blue Mage in the Final Fantasy Series. This comedic character should not be overlooked. I strongly suggest picking them up and utilizing them during a casual playthrough or even a speed run.

The quirky dialogue Quina uses throughout the game is occasionally profound and comforting. While generally humorous in nature, it is sometimes on par with the real-world concept of Zen.

Here’s something silly Quina says in FFIX I want to leave you with; take it however you wish.

“Why you care about small things? World only have two things: Things you can eat and things you no can eat.”