Yojimbo is an optional Aeon (Summon) in Final Fantasy Ten(FFX).

He is different than other Aeons. His attacks are based on how much you pay him and how much he likes you. You cannot teach him any skills.

Can he still be helpful? Absolutely. Also, you’ll need to get him to unlock the Magus Sisters.

In this comprehensive Yojimbo FFX guide, we’ll ensure you know how to best acquire him, where to do so, and how to utilize this master of the blade.

Hiding in the Calm Lands 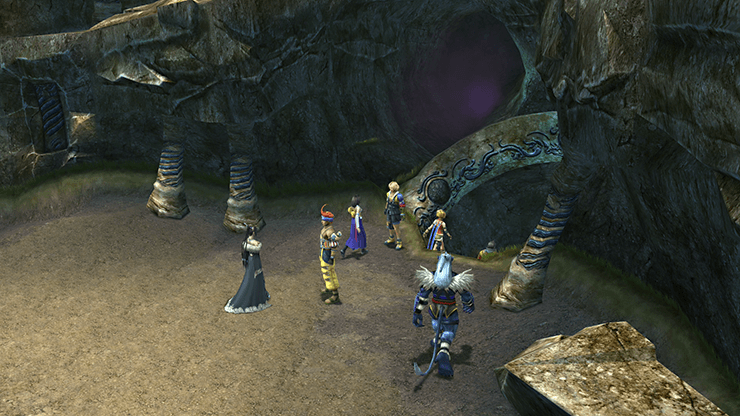 Getting to the Cavern of the Stolen Fayth isn’t a hard endeavor. The trick is whether or not you want to go there as soon as you get to the Calm Lands or come back sometime after you’ve got more money and are a bit stronger.

When you enter the Calm Lands, head toward the bridge leading to Mt. Gagazet, but don’t take it. Take a right and go under it to the valley below. The area there holds the entrance to the cavern and a Rusty Sword, a Save Sphere, and a good Blitzball Player by the name of Durren.

Grab up the Rusty Sword while there (for Auron’s Celestial Weapon), and get inside that Cavern.

The Cavern of the Stolen Fayth

Inside the Cavern, you’ll be faced with some tough Opponents. Specifically, the Tonberry. If you can’t win a fight with these little guys, it may be best to leave and come back. One of the good parts of this cavern is the possible LV2 Sphere drops from the Tonberry.

The Magic Urn may seem a significant threat because guessing wrong can lead to some heavy damage. However, guessing right gives you a lovely gift, and really you can just run from the Magic Urn.

There are several items and an Al Bhed Primer in the cavern. Make sure you have Kimhari use Lancet on the Ghosts. You can learn Doom from them. Eventually, you will meet Lady Ginnem.

This is probably my favorite bit about the Yojimbo side quest because it adds some strong character development to Lulu. Lady Ginnem, you see, was a failed Summoner who Lulu was the Guardian of. Not just failed, but she died. She is here as an unsent(a spirit), and it isn’t the easiest thing for Lulu to face.

You’ll have to fight her, more specifically, Yojimbo. 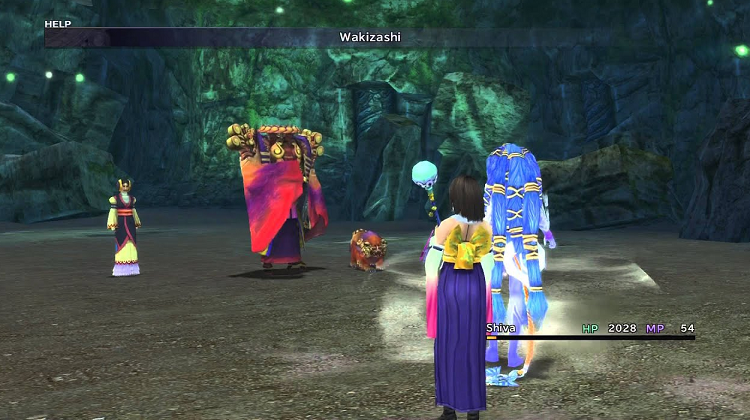 Have Kimhari use Lancet on a Ghost in the cavern to learn his Doom Ronzo Skill. Keep his Overdrive at the ready, then have him immediately use Doom on Yojimbo at the start of the battle. Easy kill.

Otherwise, if you’ve been growing Yuna’s magic stat, using Shiva and spamming Blizzaga(you’ll have to teach it to her) is a fine strategy. Shiva is faster and will get more than one spell off from time to time. Cast Haste(you will also have to teach it) on herself for the extra speed and an increase in attacks. Blizzaga on herself when you need to heal. Shield on herself if Yojimbo’s Overdrive has become full. 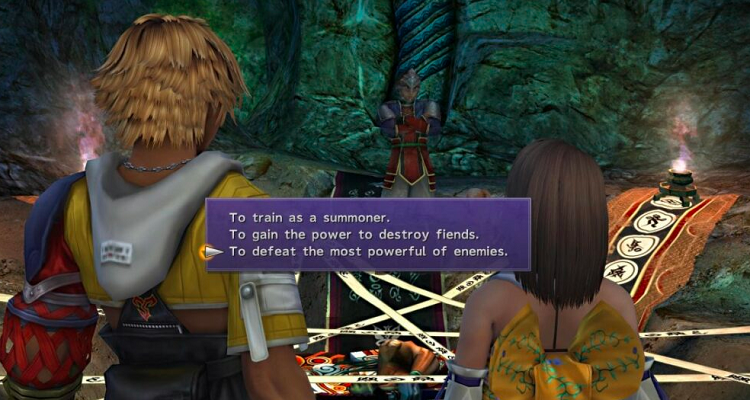 Lulu will get some form of closure from the Guardian. Yuna will get a chance to gather up Yojimbo for herself. Upon talking to him, he will ask what you wish him for.

Choose the third option to get the best use of Yojimbo (without going into the oddly complicated math they put in play for his Affinity).

Choose: To defeat the most powerful of enemies.

Now, it is time to give Yojimbo what he desires more than anything else. No, not combat, money. 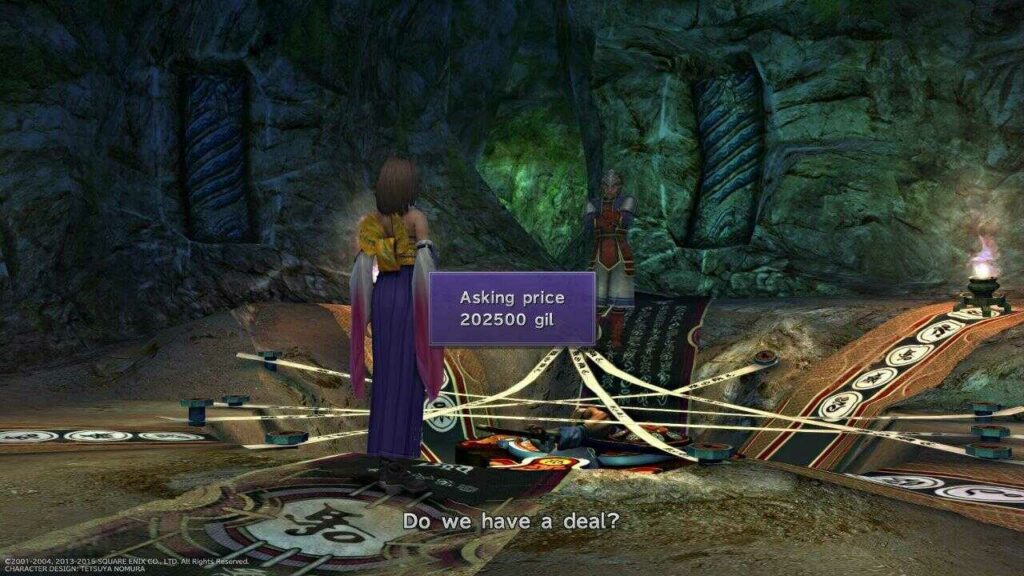 The game of haggling begins. Yojimbo will ask you for 250,000 Gil. Follow the instructions below.

There is a small probability you can get the price even lower, but if you mess up, you have to leave and teleport back and do it all over again. So, my clear suggestion is as follows.

Go to the Cavern of the Fayth to learn Doom for Kimhari. Then leave until you have 615,000 Gil. Come back and do the battle with Yojimbo. Pay him 3x the first haggling price for the Teleport Spheres. I believe his Affinity will also begin higher.

What’s his Affinity? Well, let me tell you.

Unlike other Aeons, Yojimbo has only four attacks. You can teach him no new skills or moves. Giving him extra MP is also meaningless. He will make the attacks he chooses based solely on how much he likes Yuna and how much money you give him before each attack.

Hey, maybe the world he portals into is expensive. Edo Era Japan could get pricey, I heard.

Upgrade his HP and base stats if you do want to use him. Even without a boost, he has a high evasion stat, so upgrading that and his defenses may be wise.

Here’s a quick guide to how his Affinity is affected.

Yojimbo’s Affinity Goes Down when Any of the Following Occur 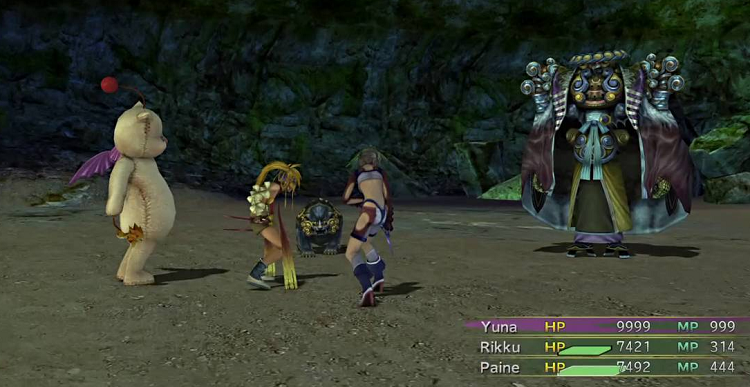 Yojimbo’s Affinity Goes Up when Any of these Things Occur

He will rarely attack for free with lower Affinity, and that attack will usually not be great. If it is Daigoro, the free attack will cost you one affinity point. If it is Kozuka, it changes nothing, and that’s not so bad.

As his Affinity gets higher(maxes at 255) with Yuna, so will the number of times he uses an attack for free. At 255 Affinity, he attacks for free about 25% of the time. Not only that, but he will usually use Wakizashi and even occasionally Zanmato. 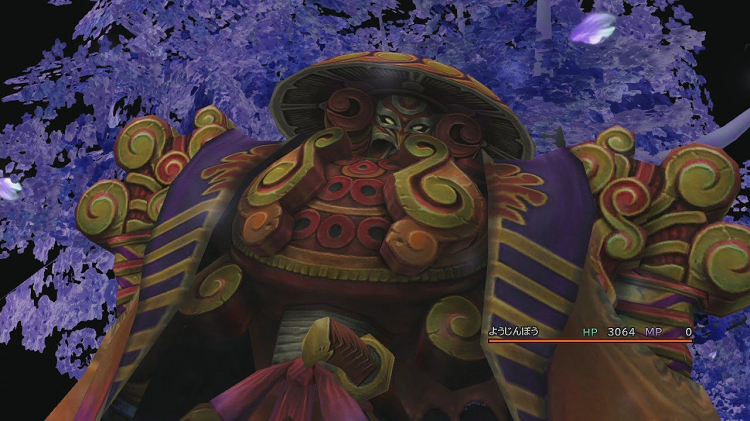 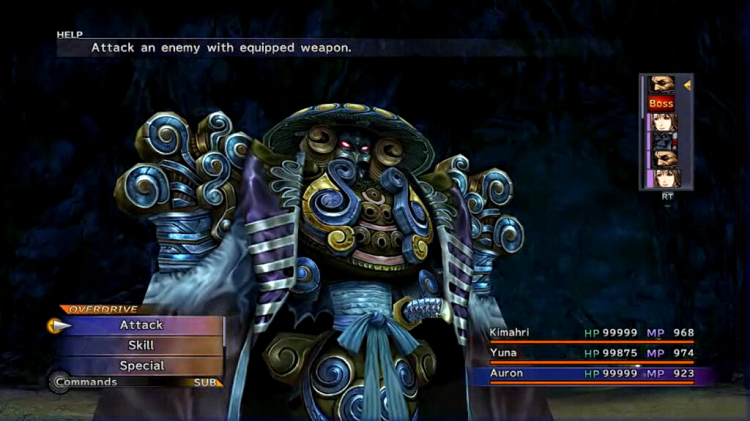 In the HD: Remaster version of FFX, it is possible to fight Dark Yojimbo. It’s not wise, but it is possible. Here’s how and his stats.

When you go back to the teleporter room of the Cavern of the Fayth, after acquiring Yojimbo, you can encounter some angry summoner at the very back of the cavern. They will call upon Dark Yojimbo, and you will start the fight.

You must defeat Dark Yojimbo Five times. The cavern will be empty of random encounters if you beat him once, and you’ll encounter him four more times. You can save and heal between encounters. Suppose you are getting relatively easy wins(holy goodness, your team is clearly badass). In that case, you can leave the cave and reset the encounters before you finish all five.

Why? To farm Dark Matter and Master Spheres from the fight, of course.

Wait until you can Break the Damage Limit, and all your party has broken the HP limit. You can spam Ultima with Double Cast and Copycat this or use Hasty fighters with Quick Attacks and a piercing weapon(Celestial Weapons can ignore defense!).

You can also summon a highly defensive Aeon with Cheer to come in when his Overdrive is about to go off. Put Shield on to bring the damage to 50,000 or below instead of 99,999. Then bring your party back in.

Make sure to have stoneproof on their armor. Auto-Haste, Auto-Protect, and Celestial Weapons are recommended.

This fight is not easy in any sense of the word, and you should not do it until you are strong enough to handily beat the game. It is most certainly for those who want to get all the goodies littered in the game more than enhance the story.

That’s all the Yojimbo for you in FFX. Oh!

You fight him again in Remiem Temple, and it’s about the same as the first fight. Only Overkill is 32,000, and so is his HP. I’d go with the Shiva start there or something similar. Anima or Bahamut could work as well.

You have to fight him at the end, but his stats will be the same as in your party, so it shouldn’t be too hard.

Question: Is Yojimbo a Summon?

Answer: Yes. Aeons are what Summons are called in FFX and the world of Spira.

Answer: Not in FFX. In FFXIV, I believe this is true, however.

Question: Is Yojimbo the Most Powerful Summon?

Answer: If you’ve got the money for it, Zanmoto does live up to that hype.

Question: Why can’t Yojimbo Use Shield?

Answer: Yojimbo does not shield; he only attacks. It’s what you pay him for.

Question: Is Yojimbo Hard to Get?

Answer: No, grind for some money, and you can get him before you leave the Calm Lands the first time.

Yojimbo is a practical, cooly designed, and standout addition to the Aeons in FFX. When faced, he is a dangerous boss and a more dangerous ally when paid. You’ll find it easy to acquire him and gain more from the game by taking the not-so-out-of-the-way time to do so.

Besides, he’s got a fantastic dog and a massive katana that appears from nowhere when he decides to actually kill something. That’s a must-have kind of summon, in my humble opinion.