The Au Ra is the dragon race of Final Fantasy XIV. Fans of Dragonborn – both in Elder Scrolls games and Dungeons and Dragons – were quick to cling to this alluring race.

But both the male and female Au Ra have been around since Heavensward. What makes this dragon race so popular with active players? Continue reading our Au Ra FFXIV Guide to find out.

What is an Au Ra?

The Au Ra is a Far Eastern race in Final Fantasy XIV who are said to descend from dragons. Their scaly skin and horns set them apart from other races in terms of appearance. The Auri people have enhanced hearing and spatial recognition when it comes to their traits.

Au Ra widely believes that Dawn Father Azin and Dusk Mother Nhaama created the world. These two deities, the god of the sun and the goddess of the moon, respectively, once fought over who should rule the new world they had created. The two gods then made the two clans to represent them in a war.

The Father created the Raen, and the Mother created the Xaela. Despite the original plan of war, the free will of the Au Ra allowed them to find peace with each other and love one another. After seeing the clans’ decision, the two gods left them to care for the world as the two of them returned to the heavens.

The Au Ra consider the Azim Steppe their place of origin. The Raen clan eventually separated to live nearby in Othard, though they were not taken in by the people of Othard. Instead, a warlord in Yanxia made an alliance with the Raen, and worked for him as warriors.

The Xaela clan never strayed far from the Azim Steppe. Though a few traveled across the lands, the majority of the Auri Xaela call the Azim Steppe their home.

Creating an Au Ra in FFXIV

When you open up character creation and choose an Au Ra, you may be overwhelmed with the choices you have to make. Though there are some choices that don’t vary much between races, the Au Ra has a few unique choices.

The two Auri clans are the Raen and the Xaela. The Raen are the adventures while the Xaela prefer to stay close to home. The stat differences in the two are slight, but still notable.

If the stats are any indication of Auri Raen’s biology, we can assume that on average, the Raen are nimbler than the Xaela. Since their base mind stat is higher, they are likely better at healing too.

The Raen chose to make peace with any other races or cultures that they could. They are not often seen in a bad light nor are they the object of sweeping racism. Most Raen are sen wearing Far Eastern garb, though considering they travel often, the style of glam they wear varies.

According to their stats, Auri Xaela is often stronger and heartier than the Raen. This could possibly be due to their genetics or their lifestyle as self-sustaining survivalists.

The Xaela clan is much more nomadic and traditional. They often exhibit racism towards other races and do not allow others inside of their culture. This either causes racism from others or is caused by the racism of others. The Auri Xaela often speak their ancient language rather than one of the newer languages known by other races. 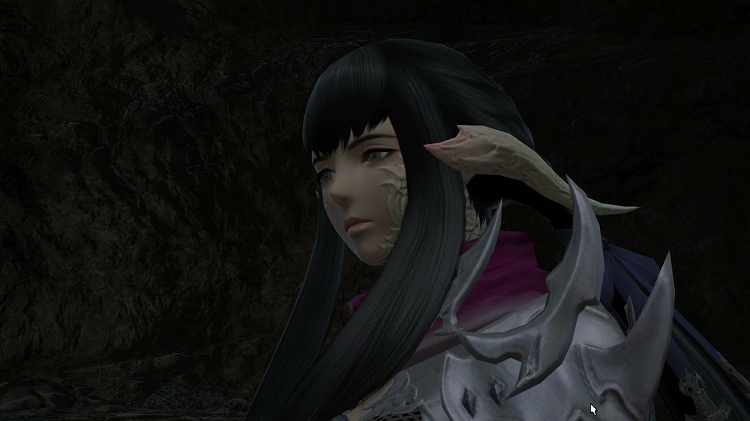 Most of the Auri NPCs in Final Fantasy XIV do not have a name and instead of titles like Adamant Oroniri Warrior or Nonchalant Watchman. But that doesn’t mean there are notable members of the Auri race.

Spoiler Alert: Spoilers for all DLC are revealed below, please skip this section if you have not finished the story and would not like story spoilers.

Yugiri is no doubt the most memorable Au Ra in Final Fantasy XIV thus far. She helps a group of Doma find refuge in Eorzea. Yugiri and the samurai prince of Doma Hien Rijin became quick friends when she was just a child. After the fall of the Doman Empire, Yugiri, Hiem, and Hien’s retainer Gosetsu, lead the refugees to safety, soon enlisting the help of the Scions.

In A Realm Reborn, the Scions of the Seventh Dawn, with Alphinaud‘s urging, helps Yugiri relocate the refugees to Mor Dhona. In repayment, Yugiri swore to do what she could to fight for the Scions’ cause. Throughout Heavensward, Stormblood, and Endwalker, Yugiri works toward both causes, exhibiting everything that a Ninja should be with incredible class and honor.

Alaqa is an important NPC during the White Mage questline. After her family is harassed by those who were racist against the Auri Xaela, Alaqa becomes violent. She uses her anger to create a zombie dragon and plans to flood the world with tainted aether. When the Warrior of Light later confronts her, she opens up and helps the other White Mages stop the dragon by purifying the tainted aether. After the fight, Alaqa is taken into custody.

In Shadowbringers, Alaqa is now a Conjurer and appears to have atoned for her sins. She helps the Warrior of Light out again on a small quest in Gridania.

If you are a Ninja main, then you will recognize this indifferent princess and her retainer, both Au Ra. Whenever Yuki met the Warrior of Light, she refused help even after being cornered by bandits.

However, her retainer Akagi was quick to secretly tell the Warrior of Light that her boss did indeed need the help. After Doma fell, Yuki, the princess of the Yatsurugi clan, decided to go rogue and take back stolen treasures.

Whenever she was again cornered, this time by a fellow ninja, the Warrior of Light stepped in to help. This time, she seemed frustrated with the help but did not refuse it.

Instead, she begins to follow the WoL’s lead. She only officially accepts help after Akagi threatens to kill himself. Later on, when someone is to be taken hostage, she gives up herself in order to keep the others, particularly Akagi, safe. They are rescued by the Warrior of Light and Yuki vows to send her thanks to those who helped her.

Cirina Mol mysteriously appears to save Hien Rijin when he is near death. She stated that a vision from her grandmother led her to Hien, who she nursed back to help after saving him. To repay her, Hien vows to liberate Cirina’s homeland, the Azim Steppe. Cirina soon takes control of the Azim Steppe thanks to Hien and the Warrior of Light.

Although she isn’t a key character in any class quest or MSQ, she is a lovable character from the Alexader raids. Mide is a quirky treasure hunter who helps Biggs and Wedge access Alexander.

After being accused of being part of FFXIV’s Illuminati, she explains that her Au Ra friends once tried to summon Alexander, but it ended with most of her group being killed. Her boyfriend was absorbed. She taught the Illuminati to summon Alexander in hopes of her boyfriend being saved. Despite her intentions, Mide regrets her actions and decides to help the Warrior of Light take down Alexander.

Sadu is the leader of the Dotharl of the Azim Steppe. Adu was born with nothing but respect being sent her way due to the belief that she was a reincarnated warrior.

She helps the Scions of the Seventh Dawn in Endwalker, showing her great power and fearlessness. While she doesn’t have an extensive dialogue, Sadu’s personality never fails to shine through. She is headstrong, sure of what she believes, and is always looking for a challenge.

Dark Knight players know Sidurgu as Sidurgu of the Obsidian Heart. When Sidurgu was young, his family was slaughtered while on their way to seek refuge from Doma. Though the killers attempted to take his life, he was rescued by Ompagne Deepblack, the first Dark Knight. Ompagne taught him to turn his anger and trauma into a drive to protect those who were incapable of protecting themselves.

In Heavensward’s Dark Knight questline, Sidurgu’s master Deepblack is dead, with his last words being what the other Dark Knights hold onto. Their quest is to find out what the words mean and how they can use them.

There are a few stereotypes that go along with the Au Ra choice. The gender stereotypes for the Au Ra are some of the most intense and widely believed, but even each clan has a stereotype when it comes to this reptilian race.

The Edgelord is probably the most common stereotype for Au Ra males. This stereotypical Au Ra will choose a job like Dark Knight and prefers to stand in the corner at parties screaming early 2000s rock lyrics on the inside as the band plays. More often than not, they choose the Xaela clan.

The Weebo is a common stereotype for a few different races, but the Raen male may be number one. When it comes to male Au Ra, the conception is that they wish they were a protagonist from a Shonen anime.

The female Au Ra is simply upset that all variants of the name Kanna Kamui were already taken and they had to choose their favorite Genshin Impact character instead. Or second, since Ganyu is also taken.

Out of all of the races, the Au Ra seems the most unapproachable. This could be their emotionless face and it could be the type of people that choose Au Ra really do want to be left alone to game in peace. Or, it could be that they are still salty that all their anime screen names were already taken.

Answer: Au Ra have a similar lifespan to Hyur, which is similar to humans in our world. The average Au Ra would live to be around 100 to 120 if they weren’t taken by unnatural causes.

Question: Do Au Ra Have Ears?

Answer: No, and you have a good eye for noticing this. The Au Ra have horns in place of ears. They use their horns to pick up vibrations. This sounds strange, but it’s not that much different than hearing our own voice when we speak.

Does Making An Au Ra Matter?

Your final decision on your race matters very little in Final Fantasy XIV. Not only can you change your race at any time with a Mog Station Fantasia, but the effect that race has on your character doesn’t go deeper than the visual. That’s why I always encourage players to follow their hearts and choose the race that they feel suits them best physically.

If you want the dragon-like qualities of the Au Ra, then go for it. If you are an RPer, then choose the clan that you relate to more or feel like creating a backstory for. It’s all fun and games, literally.