When you think of Final Fantasy, the characters that come to your mind would be Cloud, Zack Fair, Zidane, or even Squall Leonhart. All of these are mainly poster boys for the Final Fantasy series, but how about the villains? The antagonists are there to hinder your journey to defeating evil. In today’s article, we’ll be talking about the character who I’d consider as the father of all Final Fantasy villains, Garland.

Garland is a corrupted knight from the Kingdom of Cornelia who is very skillful and powerful. Although not much, we barely know anything about Garland, a new game that Square Enix developed sets to dive deep into his slow descent into darkness. Stranger of Paradise – Final Fantasy Origin sets to shed some light on the alternative story of Jack Garland.

So now that we know a bit about Garland let’s get on with the guide. This Garland Final Fantasy guide will contain information about the boss’s battle with Garland and his alter-ego Chaos, Final Fantasy Dissidia and Duodecim 012 build, short lore about the character, etc. 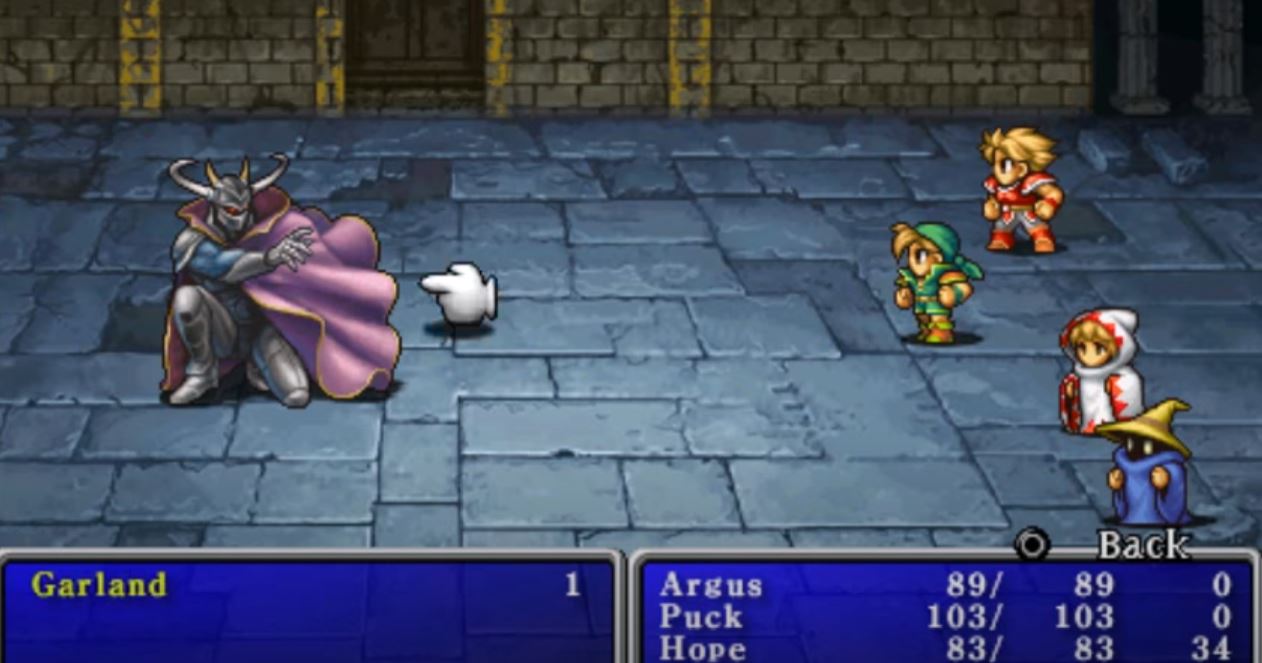 Garland is the first boss you’ll encounter in every version of Final Fantasy. His stats will vary depending on your version; however, fighting him should be pretty straightforward as an introductory boss.

Here are his stats for the Pixel Remastered Version of Final Fantasy. Take note that there’s a bit of deviance; however, it’s almost negligible.

Your party doesn’t have much to utilize at this stage of the game. Any builds or classes will work against Garland. One spell that will help get this fight a lot easier would be getting the Cure spell for your White Mage or Red Mage.

The cure spell is accessible through the vendor at Cornelia. Utilize your physically damaging characters and attack them head-on against Garland while your mages heal your party members or deal magical damage. That should be enough to defeat Garland.

After defeating Garland, you’ll yield 130 experience points, 250 Gil, and he will drop a weapon called Longsword.

So you thought you’d seen the last of Garland, eh? Well, buckle up as he merges with Chaos to become the penultimate boss of the first Final Fantasy game. Here are Chaos’ stats for the final battle against the Warriors of the Light.

Chaos has a specific attack pattern in the original NES version of the game. We’ll be using the Pixel Remaster for this guide since it’s the most recent release of Final Fantasy. In the Pixel Remaster, Chaos’ attack relies on RNG (random number generator), meaning he has access to any of his moveset at any given turn.

Here are the skills and spells that Chaos has:

Based on the list of attacks, spells, and skills Chaos has, he is deserving as the final boss of the first Final Fantasy game. With basic status effects that can destroy your party within a single term, you’d best prepare against Chaos.

We recommend getting the accessory item called Ribbon for each of your party members. Past versions of the game only have three; however, you can fully equip the party with Ribbons with the Pixel Remastered version.

Here’s the location of the four ribbons for your party

Having four ribbons protect your entire party by providing additional defense against Chaos’ spells, immunity against death from Earthquake, and paralysis from physical attacks. If you weren’t able to grab all of the Ribbons, a White Wizard should cast either NulAll or NulDeath to party members without Ribbons.

To counter Slowra, your party members could buff themselves with Haste. Since Chaos almost resists every element, it’s better to stick to physical attacks. We recommend using the skill called Temper, which raises the attack of a character by 14. Additionally, if you found the Giant’s Gloves, you can equip that to boost your party member’s attack further.

Your main healer should focus on using Healaga to heal the entire party and sustain them through the whole fight. If you don’t have a White Wizard, you could use a Healing Staff coupled with Healing Helms for your Black or Red Wizard. On top of that, a Red Wizard has access to Curaga, which the Red Wizard can use to heal a single party member.

With this strategy, you’ll be sure to defeat Chaos easily. Let’s break the strategy down into simpler terms.

Here’s a TLDR version of this strategy guide, plus a few more tips:

Congratulations, you have finished the first-ever Final Fantasy game!

Square Enix rewards Garland players for being aggressive. The more damage you do to other players, you’ll get even stronger. This effect is due to his buff called “Deranged Soul”. Deranged Soul can stack up to two times further, increasing the potency of the buff.

Let’s break down some of the moves he has for Final Fantasy Dissidia NT.

Garland is a hit or a miss character in Final Fantasy Dissidia NT; he has an excellent attack kit ranging from AOE attacks to combos. However, Garland’s kit is not an S-tier; actually, fans consider Garland to be a mediocre character. Garland can be devastating to use in the right hands, especially in conjunction with other characters in the series.

Here are some tips to utilize Garland to his fullest potential

Hopefully, these tips will be helpful if you want to main Garland in a highly competitive game. If you can share anything about Garland in Final Fantasy Dissidia NT, share those tips in the comments section below!

Garland is the best knight that the Kingdom of Cornelia has to offer. However, he turned to the dark side due to his lust for power, making him kidnap Princess Sarah and take her to the Chaos Shrine.

Garland wanted to take complete control of the Kingdom of Cornelia; hence he asked the King of Cornelia to surrender the kingdom in exchange for Princess Sarah’s life.

The Warriors of Light

Upon arriving at the Kingdom of Cornelia, each Warriors of Light carry a darkened crystal. Due to the situation at hand, the King of Cornelia recruited them to rescue Princess Sarah. Confronting Garland at the Shrine of Chaos, Garland being an arrogant and proud knight, insults the Warriors for challenging him.

And finally, the Warriors of Light were victorious in defeating Garland and rescuing Princess Sarah.

After scouring through the world, restoring the Light of the Crystals, the Warriors of Light find out that the Crystal Fiends were from two thousand years in the past. Their master was also from that era. Using the Dark Crystal, the Warriors travel back in time to try and confront them once again.

The Warriors prevailed in defeating the four fiends, and afterwards, they met the fiends’ maker. 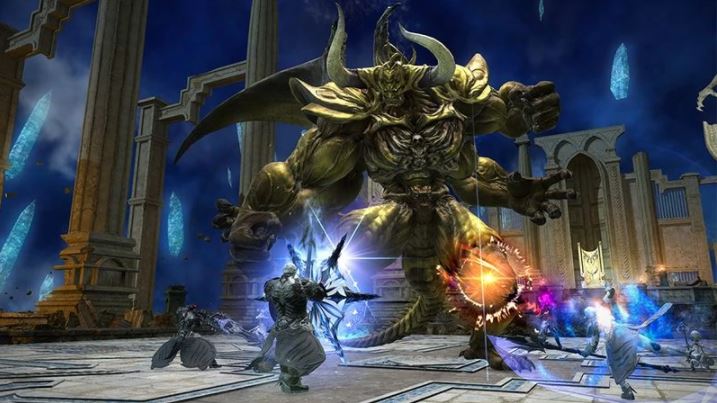 The Warriors of Light confront the fiend’s master, who happens to be Garland as well. Garland explains that while he was about to die after his defeat, the power of the four fiends in the present sent him back to the past. By doing this, Garland created a perfect time loop that makes him immortal.

Since the Warriors of Light found him already, Garland absorbs all of the fiends’ power. Doing so allowed Garland to become Chaos itself.

After the Warriors of Light triumph over Chaos, they have severed the time loop, and everything goes back to normal.

Eventually, upon uncovering his identity and his past, his lust for vengeance drove him to absorb the Soul of Chaos. An entity pulled Jack Garland back in time, precisely 2000 years before he entirely takes on the persona of Chaos.

To put it shortly, the Stranger of Paradise: Final Fantasy Origin happens before Jack Garland could establish a time loop, as seen in Final Fantasy 1. We can assume that this is a prequel to the first game.

Question: How Did Garland Become Immortal?

Question: Is Garland Easy to Defeat in Final Fantasy 1?

Answer: Yes and no, Garland, at the very early stage of the game, is a cakewalk. However, once you finish the game and find out that he is Chaos, that’s where things tend to be complicated. In previous versions of the game, you would need RNG to be on your side all the time, especially if you’re not prepared.

Garland is one of the iconic villains in Final Fantasy; However, his story was a bit too simple for a Final Fantasy villain. We still couldn’t completely disregard him as he is the first villain ever in the franchise. Hopefully, this guide helped you defeat Garland or even make him your main character in Dissidia NT.

Otherwise, here are some great reads: