Aranea Highwind is a guest party character and a boss from Final Fantasy XV. She dramatically resembles the fabled dragoon class from the classic Final Fantasy games, made known by Kain Highwind. Aranea wears the Dragon Mail’s armor, recognizable with its red and black leather accent. She wields the Stoss Spears, completing her badass mercenary look. Many fans seem to love Aranea due to her character’s flexibility from being an ally to an enemy in a split second.

In this Aranea Highwind guide, we’re going to dive deeper into her character, lore, and even how to beat the Aranea Boss Fight in Final Fantasy XV!

Aranea is a story boss in the main game of Final Fantasy XV. She is a physically damaging boss that utilizes her spear to employ ground combos which can be dodged or phased through if you have good timing.

From time to time, she will use her signature attack called Jump. This attack is a signature skill of Dragoons/Highwinds. Always watch out for this attack, as being hit by this causes massive damage to you. Keep in mind that you can parry this attack, and if you do, you will stun her, allowing you and your party members to overwhelm her by ganking up on her.

Here’s a TLDR version of this guide:

Finally! You’ve defeated Aranea; after that one-time boss fight, she’ll accompany the party at specific points of the game. Sometimes, she will accompany you during nighttime against stronger daemons. 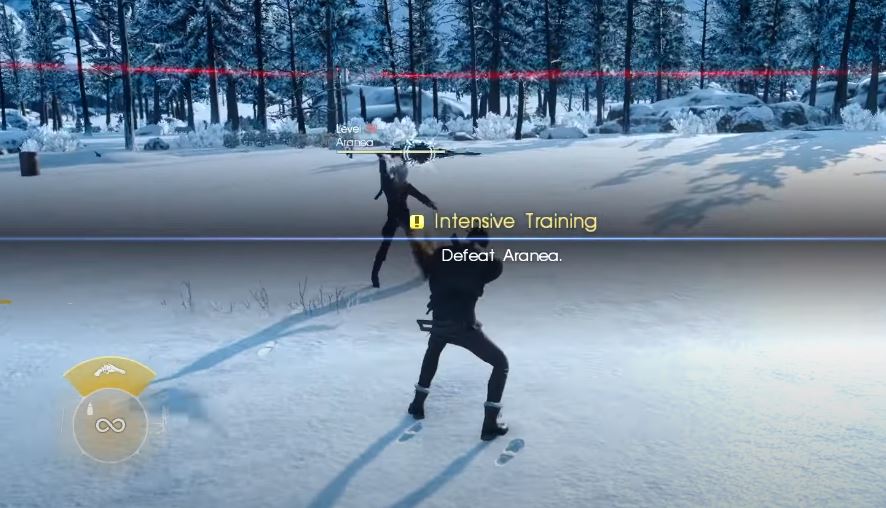 That’s one boss fight down for Aranea; the last “boss” fight against Aranea comes in the form of the Intensive Training mode in Episode Prompto. To unlock this mode, you need to finish the entire episode first, and now, you can begin sparring against the Imperial Dragoon.

The first phase isn’t too hard, but remember that you’re playing as Prompto; he doesn’t have the “safe dodge,” unlike Noctis. She has a dangerous attack wherein she will charge towards Prompto. This attack usually prompts when you stay away from her at a certain distance.

Her second attack is the jump attack from the main game. Look at the mini-map to identify where she’ll land, usually indicated by a red dot. Get away from that spot, and you’re good. 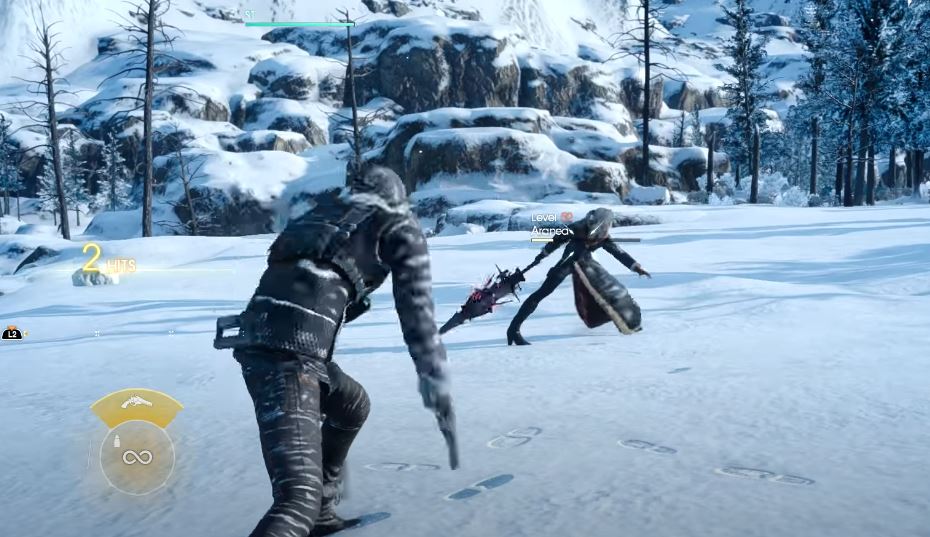 She starts her second phase when you whittle her health down to 30%. At this point, she becomes much more dangerous than her first phase. Although her moves are similar to the first phase, all her attacks hit like a truck and have a greater AOE (area of effect). Other than that, she’ll also gain another aerial strike to watch out for.

Here’s a TLDR of how to beat her in Intensive Training, plus a few more tips to help this fight be more manageable:

Aranea Glitch (Keep Her In Your Party Forever)

Who doesn’t want a badass chick as part of their party, right? Well, now you can! Although there are previous versions of this glitched, which the developers already patched out. There are two working methods available right now, and we’ll discuss them one by one. 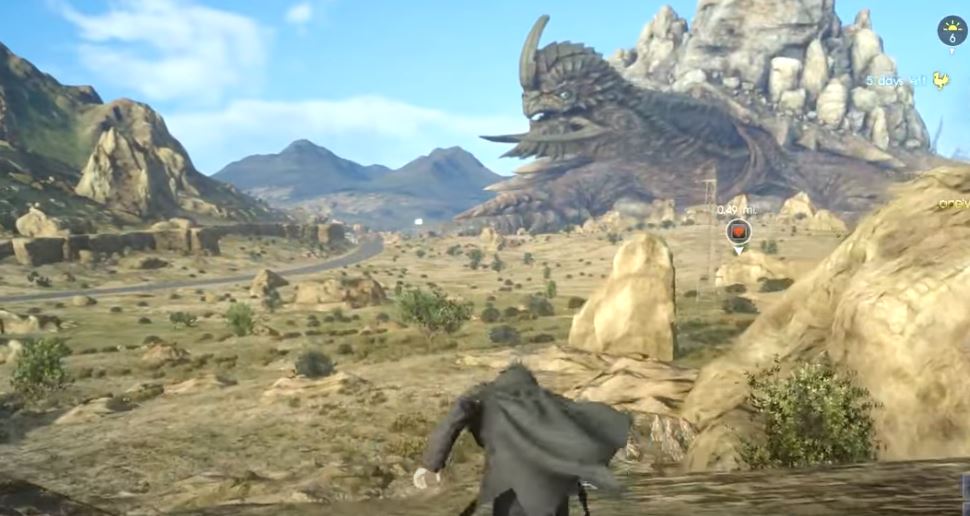 You need to have the normal Regalia (not the flying one) and hire a Chocobo for one day to prepare for this glitch. This glitch is confirmed to be working on version 1.3.0.0 of Final Fantasy XV on consoles. 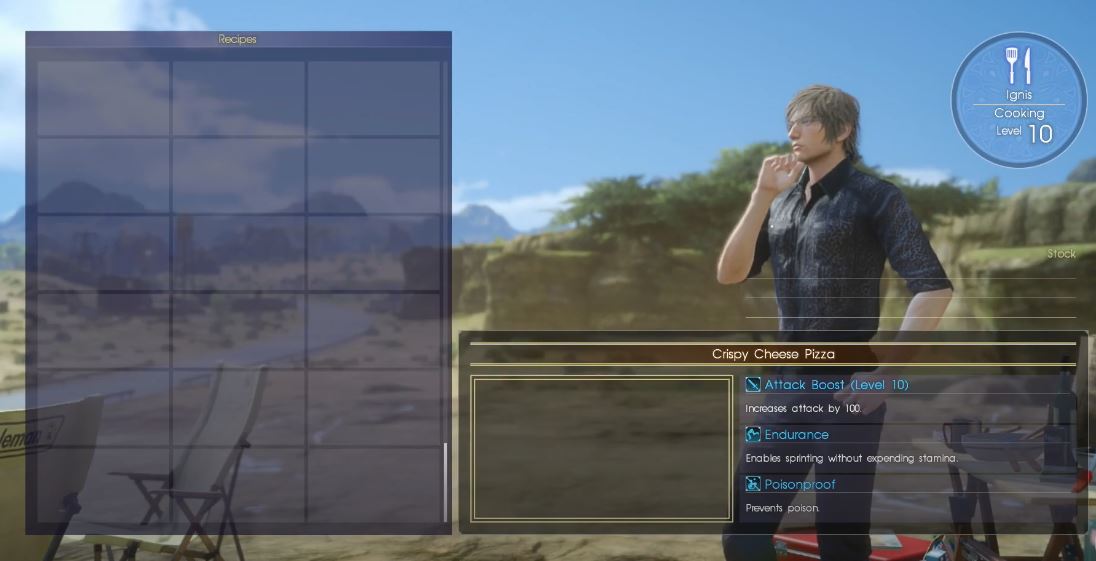 In April 2021, a Final Fantasy glitch enthusiast found a better and more efficient method than the Adamantoise glitch. The requirements are the same with using a non-offroad version of the Regalia; however, you now need to rent the Chocobo for two days. So once you’ve gotten the requirements, here’s how to do it:

While we don’t have any evidence so far that any of the above glitches would work on the PC, however, we do have a tool that can quickly add Aranea to the party. It’s called the cheat engine, and you can use that to hack the game and add Aranea into the party.

Although we personally don’t prefer hacking, you can find the main discussion right here if you are interested in using this tool.

During Aranea’s childhood, daemons attacked her village. A local church sheltered her and the other children who survived the attack while all adults fended off the daemons. Being the brave soul, Aranea initially wanted to fight with the adults, thinking she would never see them again if she split up with her parents. However, the adults did not welcome her offer to fight as she was too young and was told to stay back with the other children in the church.

A Mercenary For the Empire

After that incident, Aranea began to work as a mercenary. Niflheim hired her due to her remarkable talent and unique fighting skills. Aranea became the commodore of the Niflheim’s Third Army Corps 87th Airborne Division and directly reports to the commander. With Aranea’s long list of accomplishments defeating daemons and Astrals, the Empire awarded her with an assault craft.

After the events of Insomnia’s invasion, where we saw the death of Prince Noctis’ father, King Regis, the Emperor assigned Aranea to kill Prince Noctis and capture Lady Lunafreya. Noctis attacks and infiltrates an imperial base, and here he first meets and battles Aranea.

After losing to Noctis, Aranea leaves, stating that she doesn’t get paid for overtime.

An Ally to Noctis?

While Noctis is looking for a Mythril in the large lake called Vesperpool, he gets help from Ardyn Izunia, who asks Aranea to join Noctis and company to raid a temple. Aranea grows suspicious of the activities of the Empire. She later reveals that the Empire is harvesting specimens to make them into daemons.

Aranea disapproves of these actions by the Emperor and shows detests against the new high commander and Ardyn as well. Continuing onto the Steyliff Grove, Aranea and company push forward to kill the temple guardian, Quetzalcoatl, retrieving its protected ore.

After teaming up, Aranea promises to train the party once more if ever they meet again in the future. Aranea proceeded to patrol Lucis at night, sometimes aiding Noctis and fighting marks. For some reason, Prompto became attracted to Aranea and wondered if she was still single.

Cutting Ties With the Empire

After the Empire attacks Altissia, which results in multiple civilian casualties, Aranea decided she should cut ties with the Empire and start clean. Aranea still persevered in cleaning up Altissia. Upon arriving at Gralea, the capital of the Empire of Niflheim, Aranea finds a Diamond weapon attacking the capital.

According to a book based on Final Fantasy XV (The Dawn of the Future), Aranea found out that Ardyn unleashed the Diamond Weapon rampaging through the city. Ardyn plans to send the Diamond Weapon to Tenebrae. Finally, Aranea has had enough of the Empire’s antics and declared her resignation in order to protect Tenebrae.

Her first action in defying the Empire came when she met Brigadier General Loqi Tummelt escorting an eight-year-old girl, which Aranea takes under her wings. After that, Aranea and her companions take down the Diamond Weapon’s transport ship, destroying the Diamond Weapon in the process. While in Tenebrae, she meets Noctis and the gang once again and explains that she has nothing to do with the Empire’s attack.

Aranea lends a hand to Noctis by asking her right-hand men, Biggs and Wedge, to take them to the imperial capital of Gralea.

Aranea made an appearance in Episode Prompto as she infiltrates the First Magitek Production Facility found in the arctic region. She helps Prompto escape the facility using a snowmobile.

Upon finding Prompto camping out, Aranea joins him. Prompto opens up that he doesn’t want to go back to Noctis after discovering that he is only a clone destined to be a magitek trooper. Prompto was only able to escape that destiny because the Royal Family of Lucis kidnapped him and raised him alongside Noctis in the Crown City. Aranea convinces him that it does not matter where he came from; what matters is his own decision and what he truly wants out of his life.

After that intimate interaction, both head off to another magitek facility. Prompto and Aranea then destroyed the magitek creations there and also defeated Barbarus. As Immortalis was chasing them, both rode a snowmobile, with Aranea at the helm and Prompto mounting the machine gun at the backseat.

Escaping Immortalis, Prompto announced that he would finally rejoin Noctis and the others, and he would be heading to Gralea. Aranea watches him ride the snowmobile towards Gralea with a smile on her face.

Following Aranea’s decision to turn a new leash, she dedicates her life to helping the people fight against daemons. She accompanies Cor Leonis, a former Lucian Marshal and also, she helped a member of the Kingsglaive defeat monsters that spawned outside of Lestallum.

Upon Noctis’ inevitable return, Talcott informs Noctis of Aranea’s turn. A formerly feared mercenary dragoon turned into a praised and revered hero by the people of Lucis.

Question: Is Aranea Highwind a Dragoon?

Answer: Although the game did not officially state that Aranea is a dragoon, we can still conclude that she is one. Her last name is Highwind, which is a name provided to many characters, weapons, skills and even surnames that has ties to the Dragoons of Final Fantasy.

Some notable characters are Ricard Highwind, Kain Highwind, Alexander Highwind Tycoon, and Cid Highwind. All of these characters feature a Dragoon-like skill or a spear.

Question: Can You Play As Aranea in Final Fantasy XV?

Question: Is Aranaea originally on Final Fantasy Versus XIII?

Answer: Yes, at the trailer of Final Fantasy Versus XIII, Square Enix presented her as the female dragoon character. Although Square did not fully establish her name yet, we can assume that the female dragoon was Aranea due to her character designer, Roberto Ferrari, having already finished the character by June 2010.

Aranea is one of the most badass characters in Final Fantasy with a seemingly excellent character progression by means of a “Redemption Arc.” If you like some of the stuff that we featured here, then check out these other articles!